Much of the speculation about the so-called “Great Resignation” began after the Bureau of Labor Statistics reported that a record 4 million Americans had left their jobs in April 2021. Well, that was the record then. In August the number was 4.3 million. Another record. 4.4 million workers in September. And then yesterday we learned […] 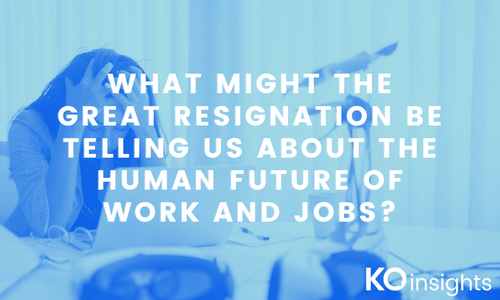 Much of the speculation about the so-called “Great Resignation” began after the Bureau of Labor Statistics reported that a record 4 million Americans had left their jobs in April 2021. Well, that was the record then. In August the number was 4.3 million. Another record. 4.4 million workers in September. And then yesterday we learned that 4.5 million US workers quit their jobs in November. How long will the trend continue, and what does it mean?

Plenty has already been written and said about the Great Resignation, and much has been said (and plenty by me) about the future of work, about automation and robots and how they will impact human jobs, and countless other related topics. But not enough is being made of what this might mean about the future of human meaning.

We’ve also done a lot of talking (and yes, me again) about digital transformation, and how much that has to do with data models and emerging technology.

What really matters about the human future of work and beyond

Most of the media coverage focuses on wages and benefits, and while those are undeniably important factors to understand, it strikes me as very plausible that much of what this trend is about deals with things most media coverage isn’t hitting: Gender inequality in home duties. Burnout. A re-prioritized sense of dignity. And for heavens sake, grief — or rather, the shifted perspective that comes from grief over lost loved ones.

For years when I have written and spoken about the future of work, I have said that the most important thing is for humans to have a sense of meaning. “What matters in all of this is that humans have the opportunity for meaningful experiences in the future, whether they derive from work or not.”

But even after separating those concepts, we’re still left with big questions about what a humanity-centered understanding of work looks like: what it means to accomplish, contribute, and achieve apart from income and sustenance.

And we’re still not sure what it means to address the overlapping trends of the Great Resignation (or Great Reset), and the waves of innovation around the “creator economy” particularly as it relates to Web3, the Metaverse, and emerging ideas and models of value. (I’m part of a group of future-forward experts that is forming around these topics right now. I’ll be sure to share more about that as I am able.)

One of the most frequently-recurring themes in my work is meaning, and I have very often said that I see no reason why humans shouldn’t have meaning in all sorts of different ways, work being just one.

I have also said (and been repeating a lot lately) that the economy is people. And in economic conditions where people are not cared for, they may be forced to ruthlessly prioritize themselves.

If all of this is true then the Great Resignation could be a sign that not enough people are finding enough of a sense of meaning in work. At least not sufficient to overcome the lack of meaning they are feeling in other areas of their lives, which makes sense given how much the pandemic has cut most of us off from our social circles, from our extended families, from leisure travel — heck, even from serendipitous encounters at coffee shops.

It also means these workers might become a bigger market than ever for employers who want to persuade them that they can find meaning at their place of work.

Still, if those 4.5 million, and those coming behind them, can’t find meaning in their workplaces now, why would they stay with the same employers — especially as they see machines taking over many of the functions in the jobs they face today?

Are we ready yet for a meaningful version of the future of work?

The main focus in the Great Resignation shouldn’t be employee dissatisfaction or talent acquisition cost or about technology taking over human employment opportunities. It’s good to create space for that discourse and to learn from it, but the underlying issue is far more fundamental: as much as we need to commit to making the workplace physically safe for humans, we need to commit to making it fulfilling, too. And that means honoring and respecting the humanness of human employees.

When it comes to digital transformation, the biggest lesson I share with leaders is often: it doesn’t start with tech. Surprise! Just as leaders too often want to begin digital transformation with technology instead of from human-centric values and experiences, too many leaders approach their talent strategy as if it can be driven by cost or satisfaction scores, rather than about infusing a sense of purpose and meaning into the organization at every level.

Figuring out how to build a purposeful organization and a culture of meaning, how to amplify relevance and intentionality in the digital experiences you bring to scale — all of this is part of the human-centric digital transformation effort I have been advocating, talking about, advising executive teams on, and leading workshops in for years. It was always important, but now, between the accelerating pace of digitization and the rising stakes in attracting and retaining talent, it’s more crucial than ever.

Even as intelligent machines, automation, and completely digitized experiences become increasingly pervasive, they won’t replace the nuanced value humans add in creative teams, in design of all kinds, in strategic thinking, and in the simple joy of a serendipitous human-to-human interaction, even if it’s only in a coffee shop.

The weirding of the future of money

All the bios, headshots, documents, and links you may need.