The fun thing about owning your own company is that every now and then you get to institutionalize ideas that inspire and excite you. Back when I owned a digital analytics agency, I instituted the practice of encouraging employees to spend the week of Thanksgiving engaged in big picture thinking, for themselves and the company. At the beginning of the week following, we’d all meet and review and if there were ideas we could try implementing to improve the company, we put them in place.

Someone — maybe it was me, maybe an employee — called it “Thinksgiving” and the name stuck.

Several years later and running a different company, I still practice Thinksgiving, only now at some level I carry it all the way through the end of the year. What starts during Thinksgiving incubates during December as I wind down my other work, and then luxuriate in spending the last week of the year immersed in deep strategic planning and big picture thinking for the next year. It feels decadent and liberating, and it really inspires me to enter the new year strong.

Let’s call it “Thinksgiving+.” I’ll tell you about it in case it inspires you to do your own version.

What’s different about Thinksgiving+ from traditional New Year’s resolution-making is that so often resolutions stem from arbitrary pressures we put on ourselves to be a more idealized version of ourselves. This process, instead, is intentionally about what will fulfill me, my business ambitions, and my personal ambitions, so the goals originate from aligning my intentions and efforts, and it becomes much easier to follow through on them. In practice, it might be the difference between an arbitrary resolution to do more exercise, versus observing that I always enjoy bike-riding and also want a little more exercise, so I’m going to try to remember to use bike share for short trips more often instead of, say, taking the bus.

Also, although the process overlaps with goal-setting for the year, as opposed to making resolutions, these aren’t necessarily commitments I’m trying to make with myself; they’re more like saying what I want out loud, so I can hear myself say it. It’s not at all about putting pressure on myself and trying to motivate myself to stick with it; it’s about being clear and honest with myself about what I want to see happen, and what kind of work I’ll need to do to get there. It’s a subtlety but it matters immensely in practice.

The other piece that makes a big difference is that once I have my plan and goals outlined, I rename and reconstruct the taxonomies of my life so that they align: my notebooks in Evernote, my lists in Remember the Milk, and my folders in Gmail, to name a few. I try to ensure that they reflect the verbiage and the spirit of the goals and the focus, so that I have contextual reminders of my big-picture direction.

Not everyone has the luxury to take the week between Christmas and New Year’s Day and invest it in planning, and perhaps not everyone would want to. But even if you only spend a few hours this week thinking about how you want 2016 to look and feel and sound and smell, even if you only write down a few thoughts about what you want in your heart of hearts, I’m betting it’ll be easier to make it happen. Good luck. 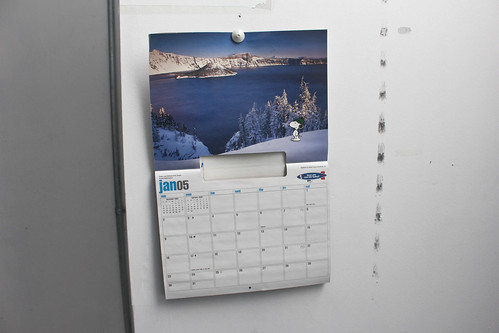 We had a lot of calendars around the house when I was growing up. Probably one in every room. The kind that used to be given away by businesses with their name and address on the bottom, so they’d hang on the wall all year as a reminder of their service. They’d display a month at a time, and as a kid it was a big thrill to be allowed to be the one to turn the page on the first of each month.

Every calendar acknowledged pretty much the same pre-printed holidays: the usuals, like Easter and Christmas and Independence Day, and then the oddballs, like Arbor Day and Grandparents Day and Boxing Day.

I remember noticing Boxing Day every year and wondering about where and why it was significant. I only knew that in other countries, there were traditions and meanings associated with it, just as there are for Christmas where I grew up.

I also figured that it was more than what we did with it. The day after Christmas in my family was for standing in the returns lines at stores and getting money back so you could buy what you had really wanted all along.

By now it seems some in the U.S. have adopted Boxing Day and subsumed it into their own traditions. For some people there’s a sort of special relaxed pace about the day; for some it’s a big shopping day: many people go shopping in the after-Christmas sales hoping to score a deal for themselves or maybe for the friend or relative they’re planning to see after the holidays. A kind of purposeful procrastination.

It’s different from Christmas, yet dependent on Christmas as an extension of its meaning. But the difference between Christmas and Boxing Day is merely social contract; it’s just a matter of adoption, and critical mass.

It’s funny how tradition can seem absurd at first. Get enough people to agree that Boxing Day is a day when we wear boxes on our head to remind ourselves to think outside the box, and you might just have yourself a cultural movement.

That in any case would be an attempt to be intentional about the day and about what it signifies. And I think that’s worth consideration. It’s worth using the days we designate as somehow special in the most meaningful ways we can. By contrast, people often seem to find themselves stuck observing Christmas traditions they’re no longer excited about, that no longer resonate with them, because they either haven’t come to terms with how to adapt or they don’t want to risk disappointing others. But that can leave us stifled and suppressed, when we could instead be experiencing the fulfillment of a day of mindful focus on, say, the spirit of giving and togetherness, or whatever other values and significance you would want the holiday to hold for you.

The same is true for any other day, really. There’s no point following someone else’s idea of how your days should be lived. You get to decide what’s meaningful, and live according to that. Life’s too short for anything else.

I’m working on some offerings that can help you do just that, by the way: in 2016, I’ll be rolling out a series of workshops, webinars, books, talks, reports, and these blog posts and my emails. So I hope you’ll stay in touch if you want to find out more about that.

But however you do it, I hope that in 2016, you get closer to staying focused on what’s meaningful and make it align and connect throughout your life. You deserve it. We all do. And not for just one day a year. Even if you wear a box on your head to do it.